Amid Politics as Usual, Every Vote Still Matters 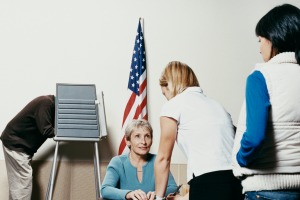 “All politics is local” is a common phrase associated with former Speaker of the House Tip O’Neill, and it couldn’t have been truer in my hometown.  My parents were very politically active and I remember spending many election days in the firehouse-turned-polling-station checking off names of people who would come in and vote.  Those lists were then run over to headquarters where others would make “get out the vote” calls to those who hadn’t yet showed up.  It was all very grassroots, and I loved every minute of it.

I turned 18 during a presidential election year, which in and of itself was exciting. Even more significantly, my dad’s name was on the ballot for city council – and he won!  When he lost in a subsequent election, it was by less than 100 votes.  This drove home the fact that every vote matters.

National Voter Registration Day resulted in nearly 145,000 newly registered voters this year.  Yet, voter turnout in the U.S. is low, and even lower in midterm elections.

Yes, it is easy to get frustrated, especially when lawmakers in Washington don’t seem to get much done.  Yes, it is easy to be cynical when money and politics are so intertwined and you have to cut through mud-slinging to find out where a candidate stands.  Yes, it is easy to think your vote doesn’t matter when pundits seem to already have called the election – making the selection process more of a popularity contest resembling that time you were voting for senior class president or the homecoming court.

Voting itself is also difficult at times.  My state doesn’t allow for early voting (only absentee), and I stood in line for nearly an hour and a half during the 2012 election.  One has to research candidates for a number of positions on local, county, state and federal, not to mention those ballot measures.

Yet, I find that things that are worthwhile aren’t always easy.  It is important to be engaged in the process.  Your vote is a representation of your voice, and opens the door for other ways for you to be engaged and create a relationship with your lawmakers.  Whether the election turns out the way you wanted or not, you can wear your “I Voted” sticker proudly and know that you helped make a difference.