Changing the Impact Game: It's Time for a Forward Pass 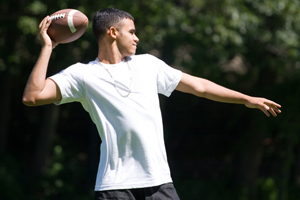 The 2014 mid-term elections are behind us, and even the most respected pollsters and pundits are surprised – not that the Republican party made gains, but by how much. Now the big question in Washington is whether the new Congress can abandon the politics of gridlock in order to move forward and govern.
I admit it, I’m cynical. Control of Congress has flip-flopped numerous times over the past 20 years; yet, these breath-taking political moments have failed to establish the kind of transformational change that voters demand when they vote to throw incumbents out of Congress.
Certainly voters have drafted new talent to their teams’ rosters. However, Tuesday’s election is unlikely to be a game changer because it not only signaled the end of the 113th Congress (lame duck session acknowledged), but also the start of the 2016 election cycle. Additionally, the fresh faces that are sent to Washington to disrupt the status quo will soon become part of an institution that is systematically designed to produce its current results as discussed in my most recent blog. Therefore, more than a dramatic election is needed to change the game in Washington.
So what more can we do to change the game? This year, Jim Gibbons, Goodwill Industries International’s president and CEO, told the story of the football coach Eddie Cochems who forever changed the game of football with the forward pass. Gibbons noted that Cochems wasn’t the first person to think of the forward pass, nor the first to try it. However, in 1906 when the forward pass was made legal, Cochems recognized its potential. He embraced the change, and he trained his offense to consistently and successfully execute it. The game has never since been the same.
When it comes to fighting for building strong communities, the key players – including businesses and employers, service providers, community-based organizations, government officials, and funders – are trying to run the ball up the field against a formidable defense.
But what’s our “forward pass”? What’s the new idea that will change the game forever?
Like Cochems, Goodwill isn’t the organization that coined the concept of collective impact, nor is it the first organization to attempt to implement collective impact strategies. However, Goodwill embraces and recognizes that it has the potential to change the world of human services by aligning and leveraging key stakeholders’ collective strengths and capacities (financial, human capital, and operational alike) in innovative ways toward one common ultimate goal. In the process, maybe – just maybe – partisans will find more common ground as such partnerships demonstrate their capacity to result in long-term impact.
Ready – set – hike!