Congress Returns With Much To Do and Little Time 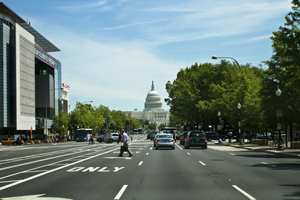 Congress comes back from the month-long August recess with a plate full of business and barely a month to finish before the end of the fiscal year on October 1.

First on the agenda is deciding how to keep the government open past the end of the FY 2014 fiscal year on September 30.  Congress has thrown in the towel on passing the appropriations bills that fund the federal agencies, and will have to resort to either a continuing resolution (CR) that keeps the government functioning until more permanent funding is approved, or move a massive omnibus appropriations bill that funds the government for all of FY 2015.  With the clock ticking loudly, most observers agree that a short term CR is the most-likely outcome, and Congress will then come back after the fall elections (or possibly the start of next year) and complete the process.

UN Treaty on the Rights of Persons with Disabilities

Goodwill® hopes to see the Senate vote on the Convention on the Rights of Persons with Disabilities (CRPD).  This UN treaty would ensure that people with disabilities enjoy the same rights regardless of the county they live in or travel to.  The treaty fell five votes shy of ratification in 2012.  Last month, the Senate Foreign Relations Committee approved the treaty by a 12 – 6 vote, clearing the way for a vote by the full Senate.  It is not clear yet when the Senate might vote on the treaty, but Goodwill and other supporters are hopeful a vote might occur in September.

In addition, Congress is on the verge of advancing the Second Chance Reauthorization Act (S. 1690/H.R. 3465). Among other things, the bill would extend the act for five years; expand existing correctional education and employment initiatives; increase the number of grant programs available to nonprofits; and improve accountability.   Goodwill supports this bipartisan legislation and urges Congress to pass the bill this year. Sources on Capitol Hill inform us that the Senate Judiciary Committee is likely to consider the bill in September. The House may advance the bill soon after. Additional co-sponsors would help the bill’s chances for success.

Just before Congress left for the August recess, the Ways and Means Committee approved the Achieving a Better Life Experience Act of 2013 (ABLE Act) in July, a major step forward for the bill.  The ABLE Act would allow families and people with disabilities to set up tax-free savings accounts to cover qualified expenses such as medical and dental care, education, community based supports, employment training, assistive technology, housing and transportation. The ABLE Act will eliminate barriers to work by preventing dollars saved through ABLE accounts from counting against an individual’s eligibility for any federal benefits program.  While Congress is still a long way from a vote on this bill we are hopeful that huge support for the ABLE Act will compel Congress to act.

Want to support Goodwill’s public policy priorities? Urge your Senators to ratify the UN Treaty on the Rights of Persons with Disabilities and ask members of Congress to co-sponsor the Second Chance Reauthorization Act.  Click on the following links that correspond to your involvement with Goodwill to take action now!

With your help we can make sure the 113th Congress closes on a high note.