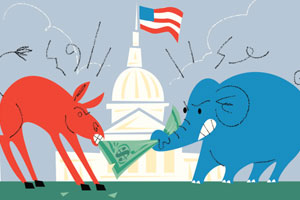 This week, Senate appropriators are working to advance a bill that would provide $164.3 billion in discretionary budget authority for the U.S. Departments of Labor, Health and Human Services (HHS), and Education. Compared to the FY 2013 level, the amount proposed by the bill would result in a $156.5 billion increase. In addition, the Senate bill is nearly 26 percent more than the $121.8 billion provided by the House version.

According to the appropriations subcommittee’s press release, the bill includes $2.7 billion for the Workforce Investment Act (WIA), an increase of $86 million compared to FY 2013 funding. Funding for the Senior Community Service Employment Program (SCSEP) would remain level at $447 million. The subcommittee approved the bill on July 10, and the full committee is expected to approve the bill today.

Beyond this week, the prognosis for the bill’s advancement is murky. This is due to a fundamental disagreement about the total amount that can be spent in FY 2014. The 2011 Budget Control Act limits spending to approximately $967 billion.

In the House, Republicans are sticking with that top line, while Senate Democrats are pushing to spend $1.058 trillion. Although Senator Barbara Mikulski (D-MD) has vowed to bring the bill to the floor for the first time in seven years, Senator Jeff Sessions (R-AL), the ranking member of the Senate Budget Committee, has vowed to block appropriations bills from going to the floor on the grounds that the amounts proposed exceed the budget cap that is currently in place.

The tea leaves don’t read any better for the House version, which is 20 percent less than the FY 2013 level (post-sequester) and 25 percent below the Senate level. As a result, the House is not expected to advance its bill out of committee.

As efforts to strike a bipartisan deal are ongoing and difficult, the end of the current fiscal year (September 30) is fast approaching. By that time, Congressional leaders will have to agree to the topline spending level for FY 2014 or trigger a government shutdown.

Using a temporary spending measure, called a continuing resolution (CR), would be an option to avert a shutdown; however, automatic across-the-board cuts would be triggered in early January should such a CR exceed the current budget cap.

While the uncertain prognosis makes great political theater, it causes heartburn for:

·      People who are trying to overcome employment challenges to find jobs despite the bleak job market.

·      Employers who are trying to grow their businesses.

·      Organizations, like Goodwill, that are on the front lines of the fragile economic recovery who are helping people to find and keep jobs despite a still bleak job market.