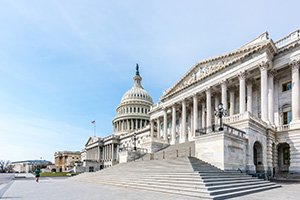 As I write this, federal funding is set to expire at midnight (again). For the last few weeks, we have been concerned that the government may shut down (again). Alas, while Congress cannot agree on how much funding to appropriate to various federal agencies and programs (again), they did reach a deal to pass a continuing resolution and keep the government funded for six more weeks (again).

There are a number of sticking points that are preventing the split Congress from passing a long-term spending bill, including funds for a border wall being sought by President Trump and also a request by Democrats to revisit the budget caps agreement that became law in early August. The next few years will have a number of predictable fiscal and policy deadlines as programs need to be reauthorized, budget caps need to be agreed to, certain tax cuts expire, and the need to prepare for the next fiscal year looms. This is not an effective way to run the government and it keeps those who receive funding or work on federal contracts on edge, fearful of another shutdown disrupting their lives, and prevents substantive policy changes that could make programs more effective from being implemented.

In the Groundhog Day movie, the only way Bill Murray’s character was able to move beyond repeating the same day was by changing his ways and adopting a new attitude. Congress has an opportunity to be Bill Murray, adopt a new attitude and work with each other in a bipartisan, bicameral manner and change their ways in approaching the funding process.