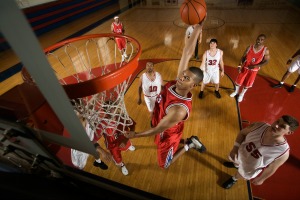 Most everyone is familiar with March Madness, the NCAA college basketball playoffs – the brackets, the hype, the fans and ultimately the games themselves. Well Washington, DC is in the midst of its own style of March Madness.

The first round started with the fight over funding for the Department of Homeland Security (DHS) and efforts to overturn President Obama’s executive order on immigration, and legislation to force approval of the Keystone XL pipeline.   The House GOP imposed a full court press on the DHS funding bill, but the Senate broke the press and passed a clean DHS funding bill that the House eventually approved.   Both the House and Senate approved legislation forcing approval of the Keystone XL pipeline but the president vetoed the bill.  An override is highly unlikely.  First round goes to the White House.

In the second round, the simmering dispute over the Federal Communications Commission’s net neutrality rule, announced in February, erupted into open partisan disagreement even as some on both sides are trying to cobble together legislation to enact those same protections into law.  Disagreements over the budget are centered on defense hawks demanding significant increases in defense spending sparring with budget hawks that are focused on deficit reduction.

The third round will revisit a familiar debate over raising the debt limit and later rounds could include reforms to Social Security and other key programs. The NCAA’s March Madness will end with the championship game on April 6.  However, Congressional March Madness will go on longer.  Fortunately, unlike the NCAA tournament you have the chance to get in the game in DC by signing up for Goodwill’s Legislative Action Center at www.goodwill.org/advocate.