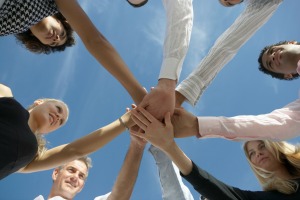 As historians inform us, the Pilgrims soon discovered that they were woefully unprepared for the harsh realities of life in the New World after they landed in New England in 1620. Many people died from starvation and inadequate housing that first year. More likely would have perished without the help of the native inhabitants, who taught the Pilgrims how, what, and where to hunt and plant in the New World. The Pilgrims famously shared a harvest feast in the fall of 1621. The rest, as they say, is history.

The relationships between the native inhabitants and European settlers eventually deteriorated with shameful and tragic results that cannot be overlooked. However, the snapshot of the period between the Pilgrims’ landing and that harvest feast is a story that teaches the value of partnership. Without the assistance given by the native people, the colony would have most certainly failed.

Fast forward to 2014; while the economy continues to slowly recover from the worst recession the nation has experienced since the Great Depression, adversity continues to lurk for individuals and communities across the country. The symptoms of economic difficulty (such as long-term unemployment, food insecurity and lack of stable housing) stubbornly persevere.

While the challenge is enormous, change is the only option. The reality is that what got us here isn’t going to get us there. In order to succeed in this New World, the stakeholders (public and private, nonprofit and for profit organizations) are going to need to determine how to work together more intentionally to use existing resources differently for shared and sustainable success.