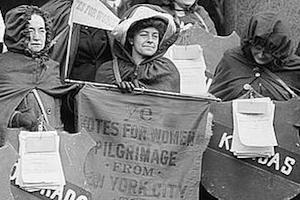 On August 26, 1920, following a long and hard-fought political campaign, women in the United States won the right to vote. To honor and commemorate this historic event, in 1971 Rep. Bella Abzug (D-NY) introduced a congressional resolution to commemorate the date with the designation of Women’s Equality Day, which is celebrated on August 26 each year.
Research shows that 95 years after securing the right to vote, more and more women execute this right of citizenship. Women have had larger voter turnout than men in every presidential election since 1980. Some attribute this to women having more interaction with government. They are often the family caregiver, and thus have more frequent interaction with schools, health care providers and eldercare workers. Women are also the primary recipients of a number of safety net programs including Temporary Assistance to Needy Families (TANF) and Supplemental Nutrition Assistance Programs (SNAP). Even local Goodwill® agencies provided in-person services to nearly 100,000 more women than men last year.
Click here to read about Goodwill’s Beyond Jobs program for women with low incomes.
Unfortunately, while strides have taken place in voting since 1920, the same can’t be said about the number of women holding elected office. Despite the record high number of women in Congress (at just over 100), a great disparity exists at the state level, where women currently hold 79 statewide elected offices, or 25.3 percent of the 312 positions available. Twenty-three states have never had a female governor. In the state legislative branch, the percentage of seats held by women has never surpassed 25 percent nationally. Today women hold 22.3 percent of state senate seats and 25 percent of the state house seats.
Inequality and injustices exist today for a number of demographics. The right to vote is infringed upon. Many government programs designed to meet the needs of specific populations aren’t achieving their intended outcomes, and those who make the laws aren’t generally representative of those impacted by the policies. But as we celebrate Women’s Equality Day and draw closer to the centennial celebration of the women’s right to vote, let’s think of ways to bridge the gender gap resulting in more women voters, more effective programs to address barriers primarily faced by women and more female policymakers.