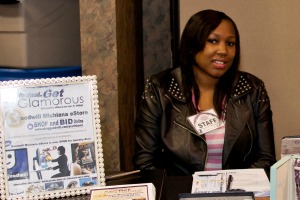 Like many others in my program at Goodwill Industries of Michiana’s (South Bend)  Second Chance @ Work Program, I was enrolled because of a felony I committed in 2009. During this point in my life I ran into many financial issues, so I began selling drugs. I had two children at the time, with no support from anyone. I began selling drugs at the age of 16 to anyone who would buy. I figured it was a fast way to get money.

On some days I could make $1,500 in one night. I ran the streets from sunrise to sunset literally selling drugs. There were many nights when I did not sleep for days on end. At the time, it felt like a career path for me. I really thought I would never have to do anything besides sell drugs to get what I wanted. I was my own boss; I did not have to answer to anyone.

One day I received a call, from a man I barely knew. He offered some money for a big quantity of drugs I had. Once I arrived at the spot we had discussed, we exchanged products and I proceeded to leave. Then a police officer pulled me over and stated he saw the whole thing and I had been setup. I was arrested.

After two weeks of sitting in jail, I was released  and I hired an attorney who told me my only choice was to plead guilty because they had a good case against me. I was eventually court ordered to complete a 20-year sentence with 10 years of suspension. On behalf of my children I was allowed to complete three years at the community corrections center and spend the remaining time on adult probation. I was closely monitored by a GPS system that monitored every move I made. I also had to submit to random drug testing several times each week. In addition to it all I was charged $85 a week for just being on the monitor along with probation fees and drug classes.

After a short period of time, I was required to obtain employment to pay for my fees, or jail time would be in my near future. I reached out to the Second Chance program and attended class daily for about 12 weeks. On December 18, 2011 I was ready for a job placement. I made $7.25 an hour working 40 hours a week. After about seven months of working I ran into childcare problems and I was forced to stop working for about two months. At the time, I felt there was no way to get ahead in life with a criminal background.

*Jakelia was able to return to the Second Chance program after securing child care. Today, she is a production supervisor at the South Bend Goodwill.