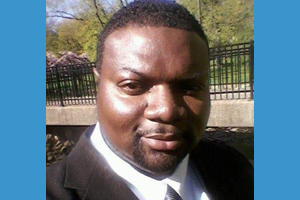 A native of Liberia, Wesley Chenoweth is pursuing the American entrepreneurial dream, and credits his experience with Goodwill of North Georgia’s GoodBiz program for helping him find the path to success. Goodwill of North Georgia awarded his company, Grizzly Delivery, LLC, with its 2020 Micro-Business of the Year award in recognition of his firm’s achievements.

Wesley’s journey to business ownership began in Queens, NY. Although he had graduated from Syracuse University with an engineering degree, his career as a project manager for the Port Authority of New York was not proving fulfilling. His cousin had started a newspaper delivery business and encouraged Wesley to join him. For the next two years, they built the business, expanding into delivery of phone books, which proved quite profitable.

Wesley moved to Athens, GA, in 2014 and brought Grizzly Delivery with him. In addition to running his business, he became active in the local community and continues to develop programs to assist underserved populations. He also worked for Groome Transportation to learn more about the airport shuttle industry.

In late 2018, Wesley realized that although he was experiencing success, he never really learned how to run a business. He says, “I was all over the place and I wanted to do a lot of stuff.” To achieve his goals, he knew he needed to start from scratch, narrow down and focus. Through networking, he learned of the GoodBiz program and visited the East Athens Career Center to investigate. He enrolled in the program in early 2019.

The 12-week program began with the basics, and Wesley realized that he could not skip steps if he desired long-term success. He says the program was “grueling, but worth it. The textbook had a wealth of information and the guest speakers added greatly to the learning experience.”

Wesley also appreciated the “tough love” approach – the instructors were not there to hold a participant’s hands when challenges arose. Wesley acknowledges that the curriculum is rigorous and the attrition proved this was not a course for the unserious.

Wesley graduated from GoodBiz with a clear vision, laser-focused on strategy. While he sees expansion in his future, he is using a methodical approach. Demands for Grizzly’s services are so great that he’s brought on two subcontractors and will soon be hiring employees. Wesley stays in touch with Goodwill’s Skills Instructor Kurt Knisley, who has invited him to serve as a guest lecturer in subsequent GoodBiz classes. Case Manager Steve Hadaway is thrilled that Wesley remains an active alum, sharing, “Wesley was a joy to work with during his time in GoodBiz. He did everything we asked of him, attended every session and was a big help to his classmates. Wesley demonstrated the drive and determination to not only get his business, started but to have it grow and thrive.”

Reposted with permission from Goodwill of North Georgia.