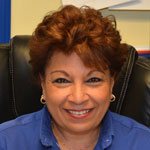 Most people only see top secret military operations in the movies. As a member of the U.S. Navy, I lived it during my military service

I went into the Navy right out of high school. I went into radio communications and was assigned to handle top secret, classified information while stationed at Keflavik, Iceland. I gave vital mission information to the pilots via coded messages during NATO exercises and was entrusted to transmit that information to high level officials via the red phone to the White House. I proudly served my country for three years.

I married, became pregnant and received an honorable discharge. Back in those days if you were on call when you got pregnant, that was the end of your career. My civilian life took me to positions as a dental assistant in Puerto Rico, a day care owner in New York, and finally, as a store manager for NY&Co, a retail clothing chain. While there, I realized working in the retail industry was for me.

After falling in love with Memphis during a 2005 visit, my husband and I moved here. I went to work in a high-end retail chain. I decided it wasn’t the right place for me and started looking for other opportunities. I answered an ad that said the company was looking for energetic and detail-oriented individuals for work in retail. I had no idea that the ad was for Memphis Goodwill Industries. All I knew was, that’s ME!

During a tour of the store, I decided I liked it and wanted to try it. I spent my first week at Goodwill training as a donor greeter with two other managers-in-training. The work was hard and I wasn’t sure if I would make it, but my store manager gave me a pep talk that helped me see how important this was. God works in mysterious ways because sometime later, another conversation with a corporate recruiter convinced me that Goodwill was where God wanted me.

I have been with Memphis Goodwill for the last four years, serving as an assistant team leader at some of the organization’s large stores. I credit my military training and service with giving me the work ethic and structure that’s helped me succeed in my job. I give my customers all the credit for making my position rewarding. I have customers that have followed me from store to store. We exchange plants, recipes, prayers and stories. They are as much a part of my life as I am of theirs. Seeing people’s lives change is what makes me happy.