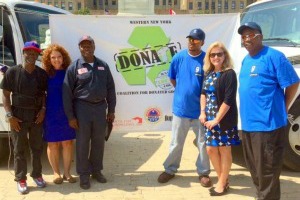 Goodwill Industries of Western New York (Buffalo) recently announced the formation of the Western New York Coalition for Donated Goods (WNYCDG). WNYCDG is a consortium of local nonprofit organizations including Salvation Army, AMVETS, Hearts for the Homeless and the City Mission. The Buffalo Goodwill played a key role in organizing the coalition with the help of the New York State Textile Recycling Association and Buffalo Mayor Byron Brown’s recycling department.

The coalition’s mission is to educate the community on the environmental and economic benefits of recycling and donating goods, and to provide easy access to donation opportunities. WNYCDG is supported and sponsored by the City of Buffalo and the county of Erie, and partially funded by the state of New York.

Initial meetings began in March 2014, and the local Goodwill notes that the progress, collaboration and excitement among the coalition members has been tremendous. The coalition aims to raise awareness about recycling, encourage more people to donate unwanted goods, and educate its community on the benefits of doing so.

Coalition members are also uniting to differentiate themselves from the other collectors whose accumulated goods do not benefit the local community. By donating to a WNYCDG member, donors are assured that they are providing valuable life changing services to people in Western New York. The group’s “keep it local” message has been embraced by area government officials and community leaders.