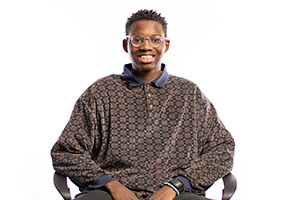 April is Second Chance Month, and we are highlighting the work that is being done by Goodwill organizations in local communities to help people get job training and earn employment to thrive after justice involvement.

In Dayton, OH, Goodwill Easterseals Miami Valley is working to help young adults who have been involved with the justice system train for and earn employment.

In 2019, GESMV received grant funds from the U.S. Department of Labor as part of the LifeLaunch 2.0 grant. Over the past two years, GESMV program staff have engaged with a wide array of young adults, each with their own stories and reasons for participating in the program. GESMV staff say it’s a privilege of working alongside these unique individuals as they seek to meet their educational, employment and training goals every day. It is a transformative process not just for the participants, but for the GESMV team.

When the COVID-19 pandemic struck, the team faced multiple challenges to participant enrollment. Stay-at-home orders made it difficult to connect with potential participants; fears of the pandemic led people to shelter at home; and access to agency partners was limited. While GESMV remained open to community and program participants throughout the pandemic, accommodations were made to safely serve participants remotely.

GED and certification classes were moved to online formats and individual meetings were conducted over virtual platforms such as Google Meet and Zoom. Regardless of the continuation of services offered, recruitment proved difficult. The GESMV team worked diligently to find new and creative ways to recruit participants for the program. That’s when the idea for a recruitment video came to life.

Because word of mouth is often extremely effective, the GESMV team realized it would be best to allow program participants to speak for themselves. Who better to speak to the possibilities that the LifeLaunch 2.0 program can open for those involved than a young mother who is completing her GED? Or a young man who has gained employment and surpassed a year in his role since leaving incarceration? Or a young man who earned his GED, finished his Google IT Support Professional Certification and enrolled in college? Or even a young man working on an IT certification while employed full time?

When the GESMV team presented their idea to the program participants, they were thrilled to tell their stories in the hopes that others would take advantage of the program. Each understood the importance of not only being presented with opportunities but also of being surrounded with a team who believes in each participant and champions the idea of second chances.

The video was produced as a collaboration between LifeLaunch program staff and GESMV’s marketing team. It was a great example that spoke to how the organization as a whole was rallying around participants and programming to work through pandemic-related challenges. Once the video was completed, it was posted to GESMV’s social media channels and attached to a QR code that was added to marketing materials distributed throughout Montgomery County, Ohio.

GESMV has enrolled several participants since the completion of the video, and it continues to be used as a marketing and outreach resource for connecting with community partners and with potential referral sources.

The Goodwill Young Adult LifeLaunch 2.0 Reentry Program is made possible with a $4.5 million grant award, covering 88 percent of operating costs, from the U.S. Department of Labor Employment and Training Administration. Goodwill is contributing leveraged funding valued at $597,241 to cover the remaining 12 percent of operational costs.