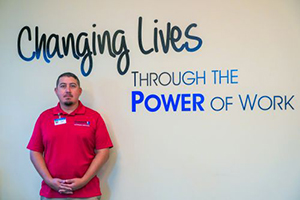 Goodwill Manasota — based out of Sarasota, FL — was thrilled to learn last December that it was one of 384 nonprofits to receive multi-million-dollar gifts from philanthropist MacKenzie Scott. In the wake of its $10 million windfall, the Goodwill is launching new programs as well as expanding existing programs, including its Veterans and Their Families Program, which will now be staffed and ready to assist in Venice and North Port.

Goodwill Manasota expects this move to allow the program to serve at least an additional 200 veterans – through case management, career services, emergency assistance and the Lutz Buddy Up networking program – in South County. According to U.S. Census data, there are approximately 1,500 veterans in the census tracts surrounding Goodwill’s Rialto and North Port locations.

Salomon is a bilingual (English and Spanish) logistics professional and military veteran who served in the U.S. Army from 2000 through 2014; his service included two tours of Iraq. He was offered the opportunity to become an Army Recruiter in 2014. Since then, he has recruited in Sarasota and surrounding counties, was placed on a one-year tour to Guantanamo Bay, Cuba, where he supported high-risk detention operations, and then recruited in Bradenton upon his return. He has lived in Venice for the past six years.

“I am proud to be part of Goodwill’s veterans’ services team and assist veterans in South County,” Salomon said. “It’s great to work with people who share the same passion for helping veterans.”

Goodwill Manasota’s Veterans and Their Families Program was created in 2013 to help veterans reintegrate into their families, communities and jobs. The program – which is staffed by veterans – provides comprehensive case management and vocational services, networking opportunities, and assistance in navigating the wide array of available social service programs.

“Goodwill is excited to expand services in our territory,” said Bob Rosinsky, president and CEO of Goodwill Manasota. “At Goodwill, we believe that our veterans deserve more – they deserve access to services they have earned, employment and housing. We look forward to seeing Mike’s contributions as we work to serve the South County heroes who served us.”

For more about Goodwill Manasota, visit experiencegoodwill.org or call 941-355-2721.