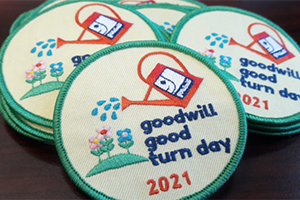 On March 20, scouts across Ohio will be visiting Goodwill stores to earn special patches for the spring Good Turn Day.

All nine of the Goodwill of South Central Ohio stores will participate in the event. The idea of Good Turn Day is to provide scouts an opportunity to do a “good turn” in their community by collecting used clothing, books, housewares and other items to donate to Goodwill.

“We’re excited to participate in Good Turn Day again, and we appreciate what the scouts do for Goodwill,” said Goodwill of South Central Ohio CEO Marvin Jones. “The scouts’ efforts will help Goodwill with its mission as a nonprofit organization to partner with individuals with disabilities and challengers to help them lead the lives they envision across our eight-county region.”

South Central Ohio Goodwill stores have awarded about 400 patches over the last four Good Turn Days. A scout can earn a patch by donating a large trash bag (or equivalent) of items or volunteering for an hour in a Goodwill store.

Limited volunteering will be available at South Central Ohio Goodwill stores on March 20 (except at the McArthur store and the Zane Plaza store in Chillicothe).

Donations for Good Turn Day may be dropped off anytime during business hours March 20 at the Goodwill stores in Athens, Chillicothe, Circleville, Jackson, Logan, McArthur, Washington Court House, and Waverly, and at the donation center in South Bloomfield. A list of store locations and hours can be found at www.GWISCO.org/stores.

This post originally appeared in the Goodwill of South Central Ohio newsroom.