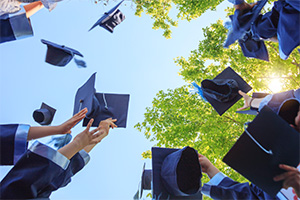 Over the last several months, students in Longview, WA, have learned the power of perseverance. Goodwill of the Olympics and Rainier Region offers GED test prep classes for youth and adults to prepare for GED tests. Due to accreditation issues across Southwest Washington, several GED testing sites were closed, leaving numerous programs unable to provide GED testing services. For the youth of Cowlitz County — who lacked transportation opportunities — this would prove a significant barrier to their education.

The youth services department at the Longview Goodwill® location, eager to solve the problem, began transporting students to and from accredited testing sites. The closest site was a 45-mile drive to Centralia Community College, which could accommodate two to six testers at one time.

As the number of GED-ready students increased, staff sought out a site with more available testing stations. The Goodwill began transporting students even further north, to South Puget Sound Community College, Lacey Campus, which was more than 70 miles away. Staff and students made these commutes each week for more than a month, as the Goodwill awaited its local testing site’s accreditation. Because of their efforts, 11 students were able to graduate with their GEDs during the lapse in accreditation.

After Goodwill staff contacted elected officials to look into the accreditation issue, Senator John Braun (R-Lewis County) swiftly addressed the situation. The local GED testing site was accredited and open for tests within the week. This response was greatly appreciated by Goodwill staff, as well as the GED students, who had also discovered the merit of perseverance in reaching their goals.