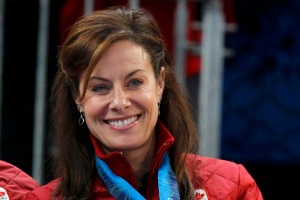 Several weeks ago, Goodwill Industries of Alberta (Edmonton) announced that Olympic medalist Cheryl Bernard is officially becoming a spokesperson for the agency.

After retiring from competitive curling, Bernard is dedicating her time to give back to the communities that supported her through her Olympic journey.

“I believe everyone should have an opportunity, and I believe Calgary and Alberta is the place to provide individuals the opportunity to focus on their abilities and become a noteworthy part of the labor force in this city and throughout Alberta,” said Bernard. She will work with Goodwill as an ambassador and strategist who will help promote what Goodwill does in communities across Alberta.

“We are just thrilled that Cheryl has joined us as an ambassador for our mission,” said Dale Monaghan, president and CEO of the Edmonton Goodwill. “Cheryl shares our passion of working with Albertans with unique abilities and connecting them with meaningful employment.”

Bernard decided to join Goodwill after touring their operations in Calgary. She learned about the Goodwill’s Power of Work program, which provides individuals with disabilities the opportunity to enhance their lives through meaningful employment.

“I met Kelsey, one of Goodwill’s employees, and if I hadn’t made the decision to join Goodwill before that, meeting her confirmed it,” said Bernard. “Kelsey is a special Olympian who, after finding out I won one medal, she said, ‘Oh, that’s okay but I have six!’ with a huge smile.”

So far the partnership has netted Goodwill several prime time television interviews, a feature on the evening news involving Cheryl and Kalsey and several leads with Calgary business including a portable donation center opportunity at a major fitness club.

By joining Goodwill as an ambassador, Bernard will champion their mission of connecting Albertans with disabilities to employment.