Hey, remember the ‘80s? Yeah, that time when the hair was big and the clothes were bold. Today we’re diving headband first into some incredible 1980s thrift store finds. If My Little Ponies can make a comeback, these things can, too—right? 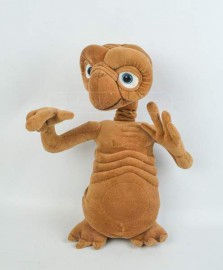 Early in the decade, 1982 to be precise, an otherworldly blockbuster swiftly overtook Star Wars as the highest-grossing film of all time. It was E.T. the Extra-Terrestrial. At the time, the film inspired a new generation’s curiosity about outer space. Now, looking back, it’s impossible to watch it without feeling like you’ve been transported (perhaps on a glittering tripod spaceship) back to the ‘80s. If you want to capture a little of that nostalgia, Goodwill is the place to look. I like to keep an eye on the social media channels of different Goodwill agencies because there are always some great period treasures like this E.T. plush toy shared by Goodwill Industries of San Diego County on their Technically Geeking pinboard. Keep a lookout for your favorite 1980s memorabilia on your local Goodwill’s social media outlets and in stores! 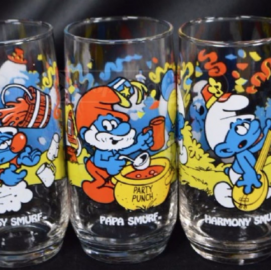 The animated series The Smurfs ran almost the entire decade, charming viewers with its whimsical, and at times dark, comedy. Airing weekly, it had plenty of opportunity to gain favor with a wide audience so it’s no surprise that a bevy of collectibles were released throughout the decade to celebrate the show. My favorite memorabilia will always be pieces that are as practical as they are fun. I just don’t have space to stash a ton of merchandise from my favorite shows and movies, so pieces like these drinking glasses shared on the Goodwill Industries of South Mississippi, Inc. (Gulfport) Instagram feed are exactly what I look for. They’d be in heavy rotation adding magic to my kitchen table, not just sitting on a shelf collecting dust. 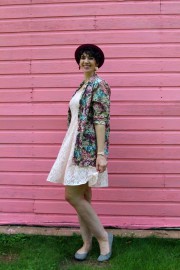 Now on to Pretty in Pink, a classic story that spotlighted a style combining soft layers of lace and florals with the structure of blazers and bowler hats. Even back then, when malls were the place to be, our inventive protagonist, Andie, rocked a thrift store style that still has a spot in our hearts 30 years later. Just ask Hannah from the blog The Outfit Repeater (pictured above)! She recently scrounged around thrift stores for enough clothing to wear throughout her week-long “Live From the ‘80s” event including this look in particular which was inspired by Pretty in Pink’s leading lady. Coming from a frugal background, Andie didn’t have much of a choice about where she could shop, but even for those who do have options, supporting Goodwill means more than just saving money. Goodwill organizations provide job preparation, skills training, education assistance and support services to millions of people each year who are facing challenges to finding employment. So, you can stretch your dollar, find old favorites, and help your community all at once by shopping at Goodwill.
What are your favorite memories from the ‘80s? Have you ever thought to look for them while thrifting? Or, hey—if you weren’t around yet when Molly Ringwald was the queen of the silver screen, what fascinates you most about the era? Whatever it may be, there’s a good chance you’ll track it down at your local Goodwill.