Rockville, MD — For the first time in the history of the semi-annual Bon-Ton Goodwill® Sale,  which began in 1994, customers donated nearly four million pounds of clothing and textiles. The sale event was held March 10 through March 24, 2010. The donated items have an estimated value of approximately $17 million in revenues, which will support Goodwill’s job training programs, community-based services and other supportive services for individuals in communities nationwide. 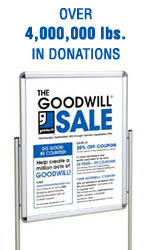 The Bon-Ton Stores, Inc. — which operates stores under the Bon-Ton, Bergner’s, Boston Store, Carson Pirie Scott, Elder-Beerman, Herberger’s, Younkers and Parisian nameplates — received donations for Goodwill at its 267 stores. Goodwill will sell the donated items in the communities where they were collected, and the revenues will support job training for people with disabilities, those who lack education or job experience, and others facing challenges to finding employment.
“We are thankful to our customers and the community for their support of our signature Goodwill Sale,” said Bud Bergren, president and CEO, The Bon-Ton Stores, Inc. “The Goodwill Sale exemplifies our commitment to the communities in which we operate.”
As a thank you to those who donated, Goodwill distributed more than 1.3 million Bon-Ton coupons, so those individuals could receive 15 to 20 percent off when purchasing merchandise in Bon-Ton stores. In addition, the Million Acts of Goodwill web site educated consumers about Goodwill’s mission of helping people find jobs and rewarded those who donated.
“The revenues generated during the Goodwill Sale will help people find jobs build their careers and support their families,” said Jim Gibbons, president and CEO of Goodwill Industries International. “We are grateful that this partnership with Bon-Ton allows us to help our friends and neighbors experience the pride and independence that work brings.”