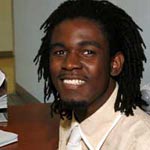 James Bennett dreamed of playing professional basketball. He was a talented player and was scouted by local high schools. But that dream ended in January 2005, when he was shot in the head and spine, leaving him with partial paralysis, because he was mistaken for a gang member’s rival.
James spent a month in the hospital and five months in rehabilitation. His school system failed to reassign him to a new school. He sat at home for three years, started using drugs and slipped into depression.
Then, shortly after he turned 18, his mother abandoned James and his younger siblings.
“What I was doing was a dead end,” he says. “I wanted a better life for me and my family.”


James decided to take control of his life. He enrolled in the brain injury program and job training classes at Gulfstream Goodwill Industries (West Palm Beach, FL). He got his first job, opened a bank account, and moved into his own apartment.
Today, James works as a front desk receptionist at the Gulfstream Goodwill and is praised for his customer service skills.
“Goodwill helped put me on the right road,” Bennett says. “I have a future and hope.  It is the best gift I ever got.”