Prior to joining GII, Preston held leadership positions in the public and private sectors as an executive.

Preston served as Secretary of the U.S. Department of Housing and Urban Development and as the Administrator of the U.S. Small Business Administration, leading both federal agencies during times of national crisis.

He orchestrated successful turnarounds as the CEO of two private corporations, Oakleaf Global Holdings and Livingston International. He was also the CFO of two Fortune 500 companies — Waste Management and ServiceMaster — during times of significant change and restructuring for each company.

Preston is a member of Fast Company’s Impact Council and has been featured in the Associated Press, Forbes, The New York Times, and in The Wall Street Journal. He has also appeared on ABC’s “Pandemic,” Bloomberg TV, Cheddar, CNBC, C-SPAN, FOX Business‘ “Varney & Co.,” and Yahoo! Finance Live in addition to appearing on numerous radio shows, podcasts and YouTube series, including AEI‘s Hardly Working, Working Nation, Future of Work and Indeed‘s Here to Help. Preston is a sought-after speaker on workforce development and skills for the future and has served as a keynote speaker for the U.S. Chamber Foundation’s Corporate Citizenship Conference: Business Solves, the U.S. Chamber of Commerce Foundation’s Talent Forward Conference, the Small Business Administration’s National Small Business Week, and the Tugboat Institute Summit.

Preston graduated with Highest Distinction from Northwestern University and holds an MBA from The University of Chicago. 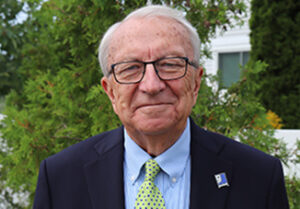 Helms has served on the Goodwill Industries International board since 2016, including on numerous committees. He most recently served as chair of the board’s Strategic Issues Planning Committee.

Helms has served on numerous organizations’ boards, including Goodwill of Northern New England; the Warren B. Rudman Center for Justice, Leadership and Public Policy at the University of New Hampshire School of Law; and the Endowment for Health. Helms also served on a healthcare study committee for the Obama Administration.

Helms did his undergraduate work at Drew University in Madison, NJ and holds a Master of Arts in American government from the University of New Hampshire.

GII BOARD OF DIRECTORS

Goodwill’s network of 156 independent, local Goodwill organizations in the United States and Canada offers customized training and services for individuals who want to find a job, pursue a credential or degree, and strengthen their finances. Each Goodwill is led by its own chief executive and governed by an independent board of directors.

Use our locator to get in touch with your nearest Goodwill headquarters or you can email us.