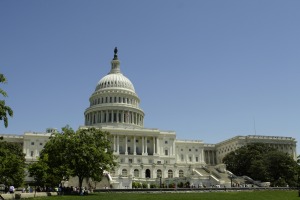 In American politics, the term “lame duck” was first used in 1863 in reference to “broken-down politicians.” However, the phrase originated in 18th century London as a finance phrase, referring to someone who defaulted on a loan or could not pay his losses and had to “waddle” away. The reference to a lame duck Congress gives the impression of being powerless; yet, in reality, the current Congress still holds the power and the duty to act on areas that will impact Goodwill® and the people we serve. There are several priorities that the 113th Congress will need to address.

Government Funding: The government has been operating under a continuing resolution (CR) which is due to expire December 11.  Action will be taken to ensure the government remains open, although a few different options are on the table:

2) A longer CR to span the entire fiscal year

3) An omnibus which will combine an agreement on all 12 spending bills into one
4) A number of minibus bills that combine only a few of the 12 spending bills where there is agreement.  The ultimate resolution may be a hybrid of options, as an omnibus isn’t expected to be released until the week of December 8
Tax Extenders:  The charitable sector is hopeful that Congress will extend the IRA charitable rollover – a giving incentive where funds are sent directly to nonprofits like Goodwill from IRA accounts and do not pose tax consequences for the donor.
United Nations Convention on Rights of People with Disabilities: The disability community is urging Senate Majority Leader Harry Reid to take a vote to ratify this convention which will help promote opportunities for people with disabilities around the world.  Click here to read more about the convention and take action to support it.

Temporary Assistance to Needy Families (TANF): Tied into the funding issues outlined above, TANF is expected to be extended without any significant changes.  However, some people are working to restore funding for TANF research and demonstration projects which is not included in the current agreement.  Without funding, projects now underway will end, thus eliminating important opportunities to learn more about effective ways to increase skills, employment and earnings among disadvantaged individuals.

Changes in committee make-up and leadership in addition to new faces in Congress present a number of opportunities for Goodwill advocates to strengthen relationships and serve as a resource to help them make informed decisions on legislation and public policy.  Time will be devoted during the lame duck in early December to flushing out Committee and Subcommittee assignments.  Since control of the Senate has flipped, the number of seats Republicans hold on Committees will increase while the number held by Democrats will decrease.  Furthermore, there will be at least 11 new members of the Senate and 56 new members of the House entering the 114th Congress.  Advocates should pay close attention to the committees on which their lawmakers are assigned.  They should meet with new lawmakers early on to educate them about our priorities and give them an opportunity to see the Goodwill mission in action.