Coming Together to Ignite Change 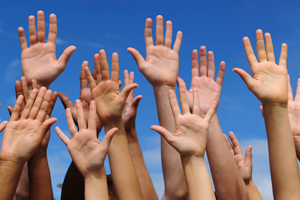 Recently I attended a discussion on citizen activism and coalition building.  In order to advance the public policy priorities of Goodwill® and the people we serve, I often have to work within coalitions made up of broad interests.  I also wanted to learn more about what motivates citizens to become engaged.  Little did I know that the conversation would lead me to reflect on not only how the lessons learned can be attributed to my work and the work of Goodwill, but also my own personal experiences.

The diverse panel spoke about their experiences seeking equality for their respective communities – African Americans, LGBT and people with disabilities.  While fighting for equality, these leaders came together along with their supporters.  Their joint efforts formed the foundation for a coalition during the civil rights era.  One speaker noted that this era “transformed America” and highlighted that civil rights became a “national issue, not a political one.”  Votes were needed from both sides of the aisle to pass the Civil Rights Act and related policies, and even today it requires participation from everyone to ensure the laws are enforced.

There have been a number of other events that have transformed America in the 50 years since the Civil Rights Act was passed.  I would be remiss if I didn’t note that the events of September 11, 2001, as arguably one of the most transformational events of my generation.  In the aftermath, the country was united, everyone demonstrated their American pride and people came to the aid of those in need.  As a Jersey girl whose hometown area was destroyed by Hurricane Sandy, I had some of those experiences again.

What events have impacted you?  How did they change the nation?  Did they change your view on a political issue? Were you able to work with people that you haven’t worked with in the past in order to create change or have an impact?

As we remember the anniversaries of the countless events that have transformed our nation, let us not forget the feeling of unity, accomplishment, and the spirit of coming together to create change that we may have also felt.   As a country, we still have a long way to go.  Challenges that led to the civil rights era or that rose out of the events on 9/11 still exist.  People are still recovering from Hurricane Katrina, let alone Sandy.

We find ourselves at a time when voters distrust our elected officials and politicians don’t seem to trust each other.  Now is a time to reflect on the instances that we have been able to come together to ignite change.  There will continue to be other transformational events that will affect our nation.  Maybe in another 13 years or maybe tomorrow.  What will your role be?