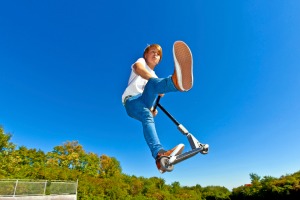 Every holiday season, it seems there’s a new toy, game or device that has parents making a mad dash to the mall. While some of those holiday favorites live on for years, others fall by the wayside faster than you can say “Happy New Year!” Luckily, Goodwill® has been available to turn the items in your land of forgotten toys (formerly known as your basement or garage) into job training and employment services for the community.

Let’s take a look at some of the most memorable and sought-after holiday toys of the last 20 years and how they can make a difference today.

Beanie Babies (1995): In the mid-‘90s, Beanie Babies were all the rage, and shoppers scrambled to find just the right ones to complete their collections. Beanie Babies had been around for years before they hit the big time, but it was a marketing strategy built around retiring certain popular Babies that drove the toys to the next level. This “manufactured scarcity” sent collectors scurrying, and by the end of 1996, more than 100 million Beanie Babies had been sold. Where are they now? Even though their heady heyday has passed, new Beanie Babies are still widely available today.

Tickle Me Elmo (1996): This stuffed, interactive Sesame Street character caused mass hysteria and literal stampedes when production didn’t meet demand for Christmas 1996. Stories of Elmos selling for 50 times the retail price, or more, were not unheard of. Where are they now? Elmo’s no one-hit wonder! Several new editions have been released over the years, including Tickle Me Elmo Extreme, Elmo Live and Let’s Rock Elmo.

Holiday Donation Tip: Goodwill  is happy to accept donations of clean plush toys in good condition. Make another child’s holiday season brighter by donating stuffed toys that are no longer played with in your home. Find your nearest donation site here.

Tamagotchi (1997): These key-fob-sized, egg-shaped digital pets required around-the-clock care and feeding. Even though Tamagotchi disrupted classrooms and gave children unexpected lessons in death when their digital pets died from neglect, consumers couldn’t get enough of them. Japanese toy maker Bandai reported a whopping $150 million in Tamagotchi sales in 1996 alone. Where are they now? Tamagotchi devices have experienced a recent resurgence as Tamagotchi Friends, and apps emulating the original devices are a hit on smartphones.

Furby (1998): The care and feeding of inanimate objects continued the following year with the success of Furby. Beloved by children and despised by family pets, these Gremlin-lookalikes demanded your attention in their own Furbish language. More than 15 million were sold in 1998 and 1999. Where are they now? Furby has been going strong in recent years with new smartphone-connected editions that Gizmodo says possess “…an unconscionable degree of loud, bright and wiggly.”

Razor Scooters (2000): Whether you were a kid in the suburbs or a junior executive in midtown Manhattan at the turn of the century, you may have transported yourself from A to B with the ubiquitous Razor scooter. More than 5 million of the original model sold in its first six months on the market, earning Razor the 2000 Toy of the Year award. Where are they now? With a number of models for kids and grown-ups, including motorized scooters, Razor is still going strong today.

Holiday Donation Tip: Donations of scooters, bikes and skateboards are always welcome at Goodwill. These donations provide opportunities for healthy, active fun for the buyers and employment opportunities for those who benefit from your generous Goodwill donations.

Bratz Dolls (2001): Although the brash Bratz dolls debuted to meager numbers in the summer of 2001, by Christmas of that year they’d built up momentum to become a hit. In their first five years, 125 million Bratz Dolls were sold, and they’d managed to capture 40 percent of the fashion doll market, giving stalwart Barbie a run for her money. Where are they now? After an 11-year legal battle with Barbie’s maker Mattel, Bratz are making a comeback in 2015 with, of course, a smartphone app tie-in and modern tech accessories.

Xbox, PlayStation and Nintendo (2005-2006): – The mid-aughts were a great time for gamers with giant leaps in technology leading to the release of the Xbox 360, Playstation 3 and Wii consoles within a 12-month period. These so-called seventh-generation consoles included never-before-seen advances like high-definition graphics, 3D Blu-ray capabilities and wireless motion-sensing controllers. Where are they now? All three manufacturers — Microsoft, Sony and Nintendo — are going strong with new editions Xbox One, PS4 and Wii U, respectively.

Holiday Donation Tip: Goodwill accepts donations of gaming consoles, handhelds and video games. Visit our website to visualize the importance of your donation to the local community.

Zhu Zhu Pets (2009) and Squinkies (2010): In a time dominated by a growing recession and popular but expensive electronics offerings, leave it to two decidedly low-tech toys to give iPads and iPods a run for their money. At under $10 each, Zhu Zhu Pets — small, battery-operated hamsters — flew off the shelves in 2009, selling 10 million units that season. The following year, Squinkies — tiny collectible figurines sold in packs of 16 — debuted at the same price point. Squinkies’ popularity was driven by a then-novel approach of encouraging mom bloggers to promote the toy. The strategy worked, and Squinkies sold out at Walmart and Target stores nationwide.

If any of these once-popular toys are cluttering your home, consider making a donation to Goodwill this holiday season. Engage your kids in the process by having them gather clothes, toys and other items for donation. The Donation Match Game is a fun way for kids and parents alike to learn about which items are best for donation versus recycling. By donating, you can give toys a second life, safely re-home outdated electronics and become a job creator in our community. And don’t forget to browse our store for your holiday gift-giving needs.

Each and every donation to and purchase from Goodwill  helps support programs that provide employment assistance to those in need — including people with disabilities, veterans and military families, single parents and more. It’s good for you and good for our community.

What popular toy of the past 20 years will you be donating this holiday season?