When I came to the Goodwill, I had just been released from prison. I had just served 9 years of a 12-year sentence, a federal sentence for crack cocaine distribution.

I was actually in the United States Marine Corps. I was in the Marine Corps from 1990 to 1994. When I got out of the military, there were not very many opportunities in the area I lived in. It was a relatively small area, but I was raised there and I figured, coming out of the military, I would have chances. I got out of there and really just got wrapped up with the wrong people. I started hanging out with a bunch of people who were selling drugs, doing those types of things. Because of a lack of money, I Was like, ok, this was what I needed to do. That was really how I got involved in crime.

I had seen it growing up, avoided it, did everything I could to avoid it. But then, when I got out of the military, I progressed into that and turned into something I didn’t want to be. I had seen many people get out of prison and go back, and it turns into kind of a revolving door for them. I was really worried about my prospects. I was a first-time offender. I had never been in trouble before, never had anything happen, and the first time I got into some trouble, I went to prison for almost a decade. It was very disheartening for me because I just didn’t know what kind of opportunities would be there for me. I only had a high school diploma and I had been in the military, so I really didn’t know what was going to happen. I didn’t think I would be able to get a good job. Even when I was looking for jobs, even my military background didn’t really—I won’t say it didn’t matter, but people looked at it and it was kind of menial. I just didn’t want to do it, and then I got lazy, and that’s what made me go into that lifestyle. 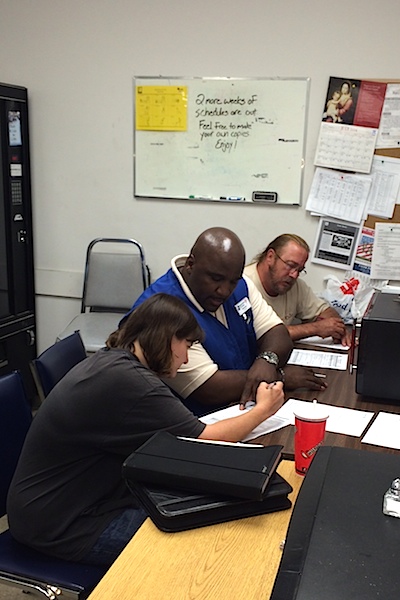 There was a posterboard on the wall at the halfway house. I saw the name, and it said something similar to helping out veterans. I was like, “Well, I’m not homeless,” because I saw the description, and it said Homeless Veterans Reintegration. All I saw was “reintegration” and “veterans,” so I was like, you know what, I’m going to call this guy. So I called him, and that’s how I initiated contact with the program.

Some of the biggest things were I had never really filled out a résumé. I was in the military, so I didn’t have to fill out a résumé to get into the military. The résumé building—learning how to do a resume. I knew how to fill out a job application. I was pretty technical, but being gone almost 10 years, you don’t get on a computer and learn all these things. That was a lot of it—computer applications, learning how to use Microsoft Word. I knew what email was, but learning how to email a document, to attach it and send it out for résumés and applications. A lot of it was those basic job skills. A lot of job searching and learning how to do it all online—that’s a lot of what I learned.

I’m working at the Goodwill Industries of the Heartland in Davenport, IA. I work for the support services office. I’m an HVRP, which is the Homeless Veterans Reintegration Program, job coach. I go into the Goodwill stores in our area, and I train veterans on working in the stores, doing all their payroll paperwork, and just kind of getting them back on track. Like it was with me when the guy took me in the store, showed me what to do. It was a way to get me back to working again, just showing me those things again.

I would tell veterans just to don’t give up. Don’t give up. Have hope that your opportunity’s going to come. You just have to be patient and know that it’s there for you. You just have to want it. You have to really want it bad. If you don’t want it, it’s never just going to come to you. I tell them all, I say a phrase, “Nothing comes to a sleeper but a dream.” That’s what I tell them a lot when I’m sitting there dealing with them. I say, “If you’re sleeping, you’re never going to see it happen, but when you’re out there making it happen, it’s going to happen for you.”