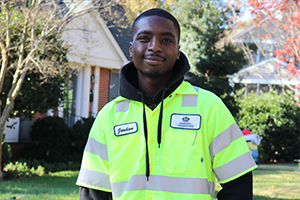 Jordon Williams has known what he wanted to do since he was a little boy, hearing a calling that most people aren’t lucky enough to hear until they are much older. “All my life, I always loved to build things,” he said.

A Charlotte native, Jordon has seen a lot of interesting buildings and structures go up in the city, and he found himself staring at them often. “One day I questioned my own self and said, ‘Why do you keep looking at these things? Are you interested?’ I said, ‘Yes, yes I am interested!’”

Jordon attended Phillip O. Berry Academy of Technology for high school, and then college to study political science. He left college after one year and worked for DoorDash Food Delivery. Then one day, his mother told him about the Goodwill Industries of the Southern Piedmont Construction Skills Training Center and the programs offered there. He enrolled in Construction Basics first, and then completed the forklift, carpentry and masonry courses, all in under a year’s time. His favorite course was masonry, which is funny because he said, “When I first came in, I didn’t even look at the masonry part. I wasn’t even planning to take that class, but something told me that it was a real skill that I should pick up, educate myself on – that would be really useful.” He connected with the course and felt that it was “more me.” It fulfilled his younger self’s desire to build things.

After completing these courses, Jordon met with his Career Navigator at Goodwill Industries of the Southern Piedmont’s Job Resource Center, Keitha Stewart. When she first met Jordon, she said that “he was determined” and still “exploring his career path.” Soon after, Keitha found an opportunity at the City of Charlotte and encouraged Jordon to apply. He interviewed despite being nervous, completed a skills test, and was then offered a full-time position as a mason!

Life is different for Jordon now that he’s working for the City. For one, his income has doubled since working for DoorDash, but more than that, he’s found friends, mentors and even a work family where he didn’t expect to. Several weeks into the job, one of Jordon’s co-workers, Howard, began referring to Jordon as his adopted grandson. Jordon says of the relationship, “He teaches me a lot about life and being a better mason.” Whether or not Jordon expected to find a mentor so soon in his career, he says he is thankful for Howard and his guidance.

Jordon may only have a couple months of masonry work under his tool belt, but he’s learned so much and would offer this advice to anyone hesitating to take the next step: “This program has a lot of opportunity, even if you’re not looking for a job. It’s a great opportunity to educate yourself on things you’re not well informed of. Goodwill® cares if you get a job or not. Goodwill wants to see you succeed, and that really means a lot to me.”

While no one knows what the future holds, Jordon hopes “for more opportunity” in his masonry career, like becoming a crew chief, and then the crew chief manager. Keitha knows he’s got it in him. She says, “The sky is the limit for Jordon, and I can definitely see him growing career wise within his City job.”

When you donate and shop at your local Goodwill, you help individuals like Jordon reach their full potential through the power of work. In fact, 87 cents of every dollar you spend in our retail stores and through shopgoodwill.com® and other e-commerce platforms is reinvested in your community to create employment placement, job training and career support services. Find the location closest to you or make a monetary donation to show your support

Note: As originally posted on Goodwill Industries of the Southern Piedmont.