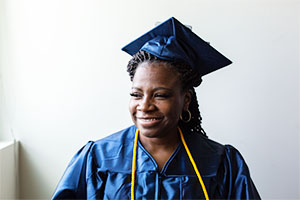 LaTara became a mother at age 15, her freshman year of high school. At the time, she was scared but she also knew she had to do whatever it took to care for her child. “I couldn’t worry about education. I had to provide,” said LaTara. She dropped out of school and went to work.

Years later, LaTara was still working while taking care of her family. She felt her job was not ideal for her busy life and knew she wanted to advance her career. However, many of the positions in her organization required a high school diploma for promotion. Her sister, Brittany, had just graduated from The Goodwill Excel Center (Excel) in Austin, Texas and encouraged LaTara to register. Now that her kids were older, she realized it was time for her to go back to school.

In 2018, LaTara enrolled at Excel. She knew it would be a challenge: working full-time, attending night classes, and being a mother. However, her children were supportive and she found additional support in the Excel faculty and staff. Said LaTara, “If I was late or missed a class, she [Campus Director] tracked me down. She was there when I needed her. And, there was always coffee waiting…that helped a lot!”

During school, LaTara made the Honor Roll multiple times. She and her family used those occurrences to “celebrate her A’s” and keep her motivated. She also served as a student mentor, assisting other students in a peer-to-peer relationship, helping teachers in their classrooms, or managing student-led events like potlucks.

After just two years, at the age of 39, LaTara crossed the outdoor stage during the socially distanced Class of 2020 Graduation Ceremony, which was conducted during the pandemic. Additionally, she was awarded the Dr. Billy Harden Student Leadership Award, for outstanding student leadership. She is now attending college with plans to pursue a career in Criminal Justice. “Getting a second chance, getting my diploma…meant everything,” says LaTara, “And I just want to say thank you.”

This article was adapted from the Goodwill Central Texas blog. Watch LaTara’s video to hear her share more about her journey and achievements as the 25th Annual Hall of Honor Outstanding Graduate.

When you donate and shop at your local Goodwill, you help individuals like LaTara reach their full potential through the power of work. In fact, 87 cents of every dollar you spend in our retail stores and through shopgoodwill.com® and other ecommerce platforms is reinvested in your community to create employment placement, job training and career support services. Find the location closest to you or make a monetary donation to show your support.