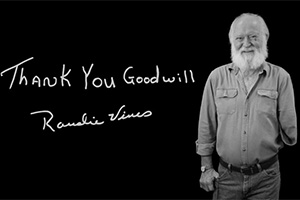 Plenty of people have had to fight their way to independence when they have a disability that prevents them from gaining meaningful employment. But, it takes a special kind of person to have to move forward with both a disability and a barrier. This was the experience of Randie Vines.

On November 6, 1981, after working a 16-hour shift at a steel mill, Randie hit a highway guardrail on his motorcycle and severely injured himself. He woke up in the trauma unit at JPS where he was informed that his arm was going to have to be amputated above the elbow. The transition to suddenly being physically disabled was rough, but he worked around not having his arm the best he could and continued to work. However, one devastating side effect of his injury was his increased drinking.

Randie had always drank, but after his accident, the drinking increased so much that it began to affect his life. After being arrested, released and rearrested on several DWI’s, in 2009 Randie was sentenced to five years in prison for drunk driving. He served two years and 10 months of his sentence and was released on May 15, 2011. While in prison, Randie was able to get sober and start his recovery for alcoholism, but his transition back into the workforce wouldn’t be as easy.

“Nobody wanted to take a chance on me. Not only was I physically limited in their eyes, but now I had a criminal record and was aging as well.” Employer after employer passed on Randie. He was told he was overqualified or not called back at all. Soon, his caseworker at the parole office referred Randie to Goodwill. He initially filled out an application with Goodwill Staffing Services, but unfortunately, they did not have any positions open at that time. Encouraged by his willingness to work, the manager of the staffing service walked Randie out to the company warehouse, where he was introduced to several department managers. Each manager spent time speaking with him and getting to know him. Randie was asked if he thought he could work the dock area, and he replied that he might have a little difficulty with the heavier items, but that he thought he could do it. Then he was asked if he thought he could run a baling machine. He replied with confidence, “Yes I can do that!”

Since 2016, Randie has been working for Goodwill in the Recycling Center operating one of the two Vertical Bailers. Randie is responsible for loading tables and gaylords onto tipper machines and tying bales when completed. Sometimes these large bales require six wires that have to be manually threaded from the top where they are channeled to the front of the bale and tied off. He then has to move the bale to a staging area for loading. Most bales weigh up to 1200 lbs. Randie does all of this work with ease with just one arm! “I don’t choose to be handicapped,” says Randie. “I’m thankful to Goodwill because they gave me a chance when no one else would. I had in 25 applications when I applied to Goodwill. They were the only ones that called me back. I hope this is the last job I have.”

When you donate and shop at your local Goodwill, you help individuals like Randie reach their full potential through the power of work. In fact, 87 cents of every dollar you spend in our retail stores and through shopgoodwill.com® and other e-commerce platforms is reinvested in your community to create employment placement, job training and career support services. Find the location closest to you or make a monetary donation to show your support.

NOTE: As originally posted on Goodwill Industries Fort Worth.