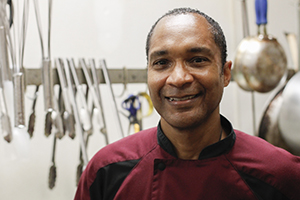 Michael McDade’s life had already been changed by the COVID-19 pandemic, but when he awoke on the morning of March 22, his world actually looked different.

“My vision was drastically impaired,” he recalls. “Everything was blurred but mostly gray and white, and I didn’t know what was going on. I had always worn glasses but never had anything like this. It was scary.”

Compounding Michael’s worries, he had just started a new job with help from Goodwill. However, he had not been working long enough to receive health insurance, and now he could no longer drive himself to work because of his eyesight.

Prior to the onset of the coronavirus outbreak in Tennessee, Michael — a professional chef for 25 years — earned his living by cooking in the homes of a few wealthy clients. He specializes in Southern cuisine — dishes ranging from shrimp gumbo to hush puppies to red velvet cake.

“I like seeing the reaction on people’s faces when I give them something great to eat,” he says.

But as people’s concerns about the virus and close contact with others deepened, he knew he would need a new source of income.

Being proactive, he visited the Goodwill Career Solutions Center in Hendersonville in late February. Michael, who lives near the center, needed to use one of its computers and to print his resume. He had accessed the nonprofit organization’s free training and employment services several times before since moving from Montgomery, Ala., to Tennessee in 2014.

“I had been to the Goodwill center in Nashville for a job fair, and when they had computer classes, I took advantage of that,” he recalls. “They also put me on an email list about jobs. There have been several times they helped me find work — it’s just tremendous.”

With his resume in hand, Michael interviewed at Park Place senior living community in Hendersonville and was quickly hired to be their new chef. But then, a few weeks later, came his sudden vision troubles. And with Michael’s family in Alabama and everyone worried about catching the coronavirus, he had trouble even finding a ride for an initial exam by an optometrist.

He reluctantly let his new employer know he couldn’t come to work.

Three days after his vision problems began, Michael got an unexpected call from Melissa Alameda, a Goodwill career counselor in Hendersonville, who asked him how he was doing. Melissa was contacting all the area Goodwill clients to check on them and see if they needed Goodwill’s assistance or employment services because of the pandemic.

“I consider it a godsend,” Michael says of the call.

Michael told Melissa all about his circumstances. She recalls him saying it felt like his life was “falling apart,” and he was particularly stressed about how he would get to his next appointment, which was with an ophthalmologist.

Melissa, who has prior experience as a life coach, says the first thing she did was try to help calm Michael’s anxiety. She asked him questions to assess his needs: did he have adequate food, did he need a place to stay or help with rent or utilities?

“She was very sympathetic — very caring,” Michael remembers. “I could hear the concern in her voice.”

Melissa says Michael expressed his gratitude numerous times during the call, saying “I don’t know why you called me when you did, but thank you. Thank you!”

When they hung up, Melissa got to work. She made numerous inquiries and identified other nonprofit organizations and community resources that might be helpful to Michael. In all, she made more than a dozen calls and sent lots of emails. But her first success came when she called the church she attends — First Baptist Church of Hendersonville.

The next day, a couple from the church gave Michael a ride to the eye doctor. After his appointment, they drove him home and on the way stopped at a grocery store to buy him food and household supplies, even though he protested that he had enough at home.

A few days later, Michael received his diagnosis: an eye disease called keratoconus. His best options for treatment were a corneal transplant surgery or expensive contact lenses. Michael, who is 51, did not want to have the surgery because the benefits may diminish after just 10 years. And he could not afford either the surgery or the contacts.

First Baptist Church of Hendersonville donated funds for Michael to get contact lenses and took him back to the eye doctor to get them prescribed. They drove him back again a few days later to pick them up.

When he put the contacts in, Michael’s vision was immediately restored to 20/20. He was able to resume driving and get back to his job — and his passion — in the kitchen at Park Place. The first meal he made upon his return included fried shrimp, fish, hush puppies and mixed vegetables. He was only out of work for about a week.

“It makes such a huge difference when you can work and support yourself,” Michael says. “I am forever thankful to Melissa, to Goodwill and to First Baptist Church of Hendersonville. They were a great help in my time of need.”

Reposted with permission from Goodwill Industries of Middle Tennessee.