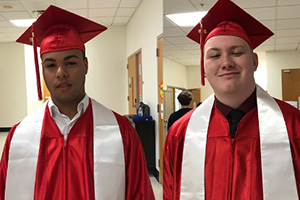 The program focuses on providing at-risk high school students support in their studies. Both Scoggins and Rodriguez were failing; Rodriguez had a 1.0 GPA when his mother enrolled him at Project COMPASS during his sophomore year.

“The teachers and other students at Project COMPASS encouraged me to keep trying even when I was ready to give up on myself,” said Rodriguez.

During the May commencement ceremony, Rodriguez received a $1,000 scholarship toward his continuing education at Valencia College, where he’s planning to pursue a degree in electrical engineering.

Scoggins plans to focus on building his physical fitness so he can enlist in the Army.

“I was a lot smarter than I let on, but I wasn’t motivated until I met the teachers and other students at Project COMPASS,” added Scoggins. “I learned the only person holding me back was myself.”

Nine other graduates also received their diplomas with Scoggins and Rodriguez.

Since the launch in 1998, Project COMPASS has served 1,635 students and graduated 140 adults. The program’s graduation rate is 90 percent, higher than the national average of 84 percent.