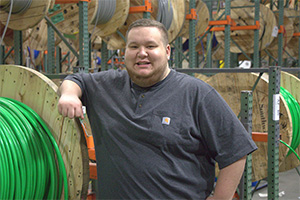 Dylan Snell is a project manager at Kirby Risk Electrical Supply in Indianapolis. He received his high school diploma from The Excel Center, an education and credentialing program created by Goodwill of Central and Southern Indiana, and he worked for three years at a Goodwill store in Anderson, IN.

My name is Dylan Snell. I live in Anderson, Indiana, and I’m a project manager for Kirby Risk Electrical Supply.

I am a part of businesses going up and places being built, which I think is awesome.

I grew up in a time when the town lost a lot of the factories. Poverty became very big in the town.

My dad had a really good job in a factory, but then he lost the job. He did a lot of drinking and then just kind of ignored the fatherhood thing. My dad left our home and we ended up losing it, which caused me to go wherever I could to have a roof over my head. I was bouncing couches and just crashing with friends.

My junior year I dropped out of high school. I needed to work. I was homeless.

So I picked up a job at a gas station. I gave gas to my friends during the summer and eventually got caught. And that was when I was arrested and put in jail for the felony theft charge.

I was thinking that I really don’t have a whole lot going for me. Because most times when you get in trouble, judges say “Did you graduate? Do you have a job?” And I didn’t have either.

I then made the decision that I have to change things, and I enlisted help from a friend that I knew was going to the Goodwill Excel Center.

Everyone in my family had kind of looked down on me because I was the first one not to finish high school. Well the result of 12 weeks in The Excel Center was I graduated with a state standard diploma.

Without the program, I don’t know where I would be today. My experience at The Excel Center was absolutely life changing.

When I graduated, I gave a speech and was approached by Kent Kramer. He was a vice president at Goodwill of Central and Southern Indiana at the time. He’s the CEO now. He handed me a card and told me to give him a call if I needed a job. I got a hold of him and he hooked me up with a job at the Goodwill in Anderson.

I started off as a cashier and worked my way to assistant site leader. I spent about three years at the Anderson Goodwill. I had a roof over my head. I had a vehicle. I was paying my bills regularly, and everything was just going really, really good for the first time in a while.

I had never seen myself leaving Goodwill, but I just knew that I want more. I enlisted the help of Goodwill’s job placement team. They recommended a couple of positions, and they told me there was an employer that would look past things like my criminal background.

I didn’t know anything about electricity when I started my job with Kirby Risk Electrical Supply. But I think it’s something I’m going to be with for the long run. I’m a project manager now, dealing with contractors that are bidding for big jobs, such as building factories.

It’s been a wild ride. But I definitely, definitely credit Goodwill for being the backbone that helped me get to where I am today.

Goodwill Industries International has named Dylan its 2019 Graduate of the Year.

When you donate and shop at your local Goodwill, you help individuals like Dylan reach their full potential through the power of work. In fact, 87 cents of every dollar you spend in our retail stores and through shopgoodwill.com® and other e-commerce platforms is reinvested in your community to create employment placement, job training and career support services. Find the location closest to you or make a monetary donation to show your support.