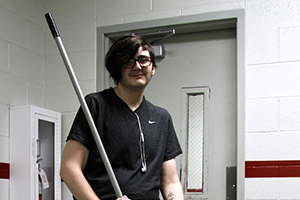 Traditional schooling isn’t always the right option for students. This was true for Gunner Pemberton, who was referred to Goodwill® to obtain his GED.

“I didn’t like school as a kid,” Gunner commented. “That’s why I came here to get my GED.”

Gunner arrived at Goodwill to pursue his education, but he left with so much more. Enrolling in the GED program at Goodwill’s Work Opportunity Center in Longview, WA, he was swiftly connected with Youth Employment Services. It was in this program that Gunner received the support and opportunity that helped him secure his first job.

Gunner completed a week-long workshop series that educated him on internship opportunities, helped him develop a targeted résumé, and allowed him to practice interview skills with Goodwill staff. He interviewed for and was offered a paid internship with YMCA of Southwest Washington through a Workforce Innovation and Opportunity Act (WIOA) Title I grant.

While working in the maintenance department, Gunner had the opportunity to work with mentors and gain additional support onsite. “I had a few problems at first,” he stated, “but I worked through it by talking with my team at the Y.”

As a prominent feature of the internship, Gunner received performance evaluations on a weekly basis. “I needed to know how I was doing, to get that feedback,” he commented. In addition to receiving consistent performance evaluations, Gunner participated in financial literacy and professional development workshops during check-ins at Goodwill.

Following the completion of his 10-week internship, he was offered a permanent position at YMCA in the maintenance department. As Gunner enjoys this new work-life balance, he continues to work on life goals: a digital literacy credential offered at Goodwill, as well as obtaining his driver license.

“I have to say I’m very thankful to the Goodwill,” Gunner stated. “They helped me get my GED, my food handler’s card…. The people there are great!”

Gunner’s tenacity and grit resulted in several personal and professional victories during his time at Goodwill; his journey shows that with a little support, people can gain the confidence and skills they need to thrive.