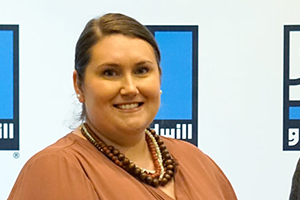 Mary Strickland’s difficulties with mental health began after high school. In 2007, she was a student at the local university working on a bachelor’s degree at the age of 18. Then, one day, she stopped going to class. Suddenly, she was too tired and worn out to even get dressed and drive. In 2010, she dropped out of school and, for the next five years, floundered. She had jobs in law offices and had been a pre-law major in college, but she was fired from each of them.

Whether from sleeping through alarms or not giving her full potential, her depression and anxiety always got the best of her. During this time, she formed a close bond with her father, who had known the darkness of depression and anxiety himself for most of his life. In 2016, she lost her father to suicide and was absolutely broken from the inside out and lacked motivation or direction. Then in 2017, she heard about Goodwill Career Campus and registered for training as a home health aide.

During this time, Mary gained a sense of direction and self-respect. She worked hard to earn her Home Health Aide certification and then completed her Certified Nursing Assistant certification. She then applied to a very prestigious nursing school in town, was accepted and graduated with a degree in nursing in July 2020 and passed her boards the following month. She completed her first Bachelor of Science in Nursing accelerated course with an “A” in February of 2021.

“I am grateful every day that I go to work at one of our town’s major hospitals, to my family and friends who supported me during my journey, to my partner Kevin, and undoubtedly for the Goodwill Career Campus for being my very first stepping stone,” Mary says. “They gave me more than a certificate. They gave me a future — one that I am eternally proud of. I’ll keep going!”

Mary was recently honored as Goodwill Industries – Big Bend’s Graduate of the Year.