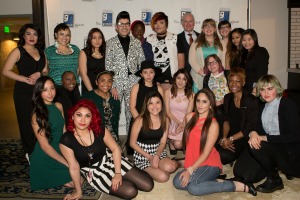 Gunn co-hosted the fundraiser with 7NEWS meteorologist, Lisa Hidalgo. Guerra, winner of Project Runway All-Stars, oversaw a team of judges who scored the student design competition, which was the first fashion show held at the recently restored, historic Union Station.

The student winner, Jackie Rodriguez, is a junior at CEC Middle College of Denver and is receiving help to prepare for her future through Goodwill Denver’s programs at her school. Her winning design incorporated drapes found at a Goodwill store that were transformed into an elegant pantsuit, inspired by the style and society of the 1920s. Her design earned her a coveted fashion design internship with Guerra.

More than 450 guests viewed a multitude of upcyled designs by students from Goodwill’s high school programs, each inspired by a different decade in history. In addition, area celebrities modeled in a show of upscale, chic trends from Goodwill’s Déjà Blue Boutique – the agency’s upscale retail location in Cherry Creek North.

The Goodwill plans to host a similar event in 2016. Stay tuned for more information!