We’re hard on clothes. During all the movements required in our daily lives, we tug, we stretch, we chafe– it’s amazing we haven’t all just given up by now and collectively decided to go back to wearing togas.

As my own kids get bigger, the selection of hand me downs we’ve gotten from friends and neighbors are slowing to a trickle, since keeping children’s clothes in good condition as they enter their daredevil years gets increasingly more challenging. I see it in the bags of clothes I hand down to others, too, which seem to include fewer unstained shirts, fewer unripped knees, and fewer shoes that have any life left in them– whatsoever.

Apparently my oldest is at the age where blowing through the knees of his pants on the playground has become a daily occurance. A sport even. I’ve spent the last few months repairing the holes on his favorite pants repeatedly, only to find him come home with the same old holes reopened, and new hole friends to introduce to me to. 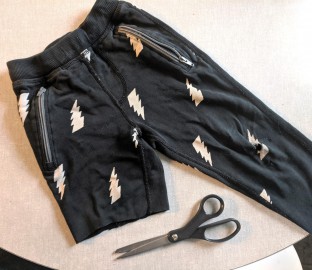 By the time those lightning-print knit joggers he loved so much had been patched for the fourth time, they had been inadvertently shortened by at least two sizes. While I don’t mind my kid wearing high-waters for a while, he seemed dismayed when his socks wouldn’t come up to the bottom of his pants anymore.

So this week I decided it was time for the scissors. Rather than tossing his beloved floods, I turned them into super-awesome summer shorts. An easy decision to make, considering they were nearing that length already. But it was even easier to make since the fact that they were knit meant they didn’t need any additional hemming.

I was careful to do this while he wasn’t looking of course, to save myself the panic it was sure to incite. Though I was a bit reckless in my cleanup. When he discovered the cut-off portions of his pants laying on the kitchen table (or as I call them, my new cute dust rags…..) he confronted me immediately.

“WHAT IS *THIS*!?” he demanded. I was caught scissor-handed. 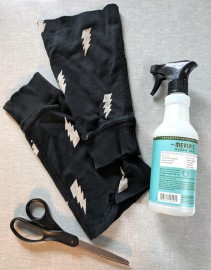 But when I showed him the “new” shorts he had, all was well with the world again.

And seriously, if you’re NOT thrifting for your kid’s clothes, you’re totally missing out. Don’t believe me? Just watch Carol’s Goodwill haul here, and the cute BODEN stuff she found! 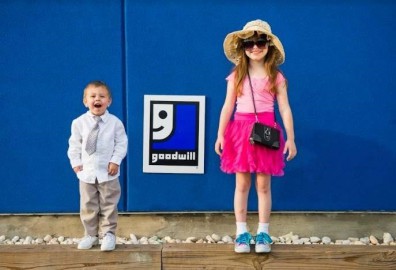 Take it a step further and help teach your kids where their clothes come from and the importance of buying secondhand. Take them along on your next trip to your local Goodwill® and explain all the great things that come from purchasing and recycling used goods, and how it impacts their community.

Or if you can, participate programs that help connect children with the Goodwill Mission, like this one from the Goodwill Industries of Sacramento Valley & Northern Nevada.

Chances are good you live near a Goodwill and you may not even know it! There are more than 3,300 stores in the United States and Canada. Find yours here!