Haiti Earthquake: How You Can Help 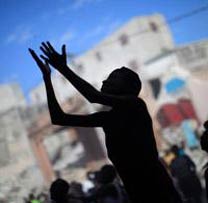 The rebuilding continues in Haiti as the people there struggle to recover from the worst earthquakes that have hit their country in more than 200 years. Aid continues to pour into the country and is increasingly reaching those in need. Despite huge challenges, humanitarian access is improving daily.
U.S. nonprofit humanitarian and development organizations have collectively received an outpouring of donations totaling $350 million and counting. These organizations have several thousand staff on the ground responding to needs.
InterAction, a coalition of U.S.-based international non-governmental organizations (NGOs), has launched the Haiti Earthquake Relief Barometer, which will tally the aggregate of private donations to relief organizations on a weekly basis. In addition to the barometer, InterAction has developed an NGO Impact in Haiti Factsheet to offer specific details about the scope of organizations’ work in Haiti.
The caring people that work at 164 member Goodwill enterprises in the United States and Canada, as well as 13 other countries, send their thoughts and prayers to the people of Haiti, and some local Goodwill agencies in the United States are aiding in the effort by partnering with other disaster relief organizations to assist in providing relief services:
In Portland, OR, Goodwill Industries of the Columbia Willamette is donating $10,000 to “The Haitian Project,” a Catholic mission which supports and operates Louverture Cleary School, a tuition-free, secondary boarding school for economically underprivileged Haitian children. The Goodwill has an advisory relationship with The Haitian Project, and will match, dollar for dollar, all donations to the effort  by its more than 1,800 employees in Northwest Oregon and Southwest Washington.
Goodwill Industries of Greater NY and Northern NJ (Astoria) has created a Haitian Relief Fund, which is directly supporting the American Red Cross and Doctors without Borders. Online contributions will be split evenly between the two organizations.
Goodwill Industries of Kanawha Valley (Charleston, WV) donated $5,000 to the American Red Cross for Haitian Relief.
Goodwill Industries of Monocacy Valley’s five retail stores in Frederick and Carroll Counties, MD are now accepting monetary donations, which can be made at any store at the check-out counter. Donors will receive a printed receipt showing their contribution toward this important humanitarian effort, which is being embraced worldwide. For more information about making donations to Haitian relief through the Goodwill stores, visit www.gimv.org, or call (301) 662-0622.

Goodwill Industries of Eastern North Carolina (Durham) has donated $100,000 to North Carolina Baptist Men, a disaster relief organization, which is on the ground in Haiti helping earthquake victims.
Goodwill (serving North Central Wisconsin – Menasha) is raising money for the Red Cross Disaster Relief Fund. Any gifts made or pledged by March 31 by the Goodwill family (all team members, campus partners, board member and program participants) will be matched dollar for dollar by the Goodwill and transferred to the Red Cross for Haitian relief efforts.
Goodwill Industries of South Central California has partnered with other Bakersfield-area agencies and serves as a “Red Cross Donation Center for Haiti Relief Effort,” collecting financial donations at all of its Goodwill retail stores and donation centers.
Goodwill Industries of South Florida’s (Miami) more than 300 Haitian employees and program participants are living very desperate moments now, as they wait for news from family members in Haiti. Two designated Goodwill locations are serving as Haitian Information and Relief Offices. These offices will continue to monitor and provide updates as news of family members’ and their needs arrives. Cash contributions in the Miami area may be made to Operation Hands, a Haitian relief fund coordinated by United Way of Dade County and The Miami Herald newspaper. Call (305) 646-7129 to donate to this fund, which will go directly to help the people in Haiti through reputable organizations already in the ground.
Goodwill Industries of Southwestern Michigan (Kalamazoo) has donated 24 sets of scrubs to nurses and doctors from the area who are on their way to Haiti.
Tacoma Goodwill Industries (WA) is offering its employees an easy way to donate by signing up for automatic payroll deductions during the month of February. The payroll deductions will go directly to the American Red Cross Haiti Relief and Development fund.
Search and rescue and other efforts will continue as long as there is hope. As Goodwill’s mission is to generate opportunities for people to achieve economic stability and build strong families and vibrant communities through community-based job training and employment placement programs, we encourage you to contact and support your choice of the following agencies that are providing immediate, broad-based humanitarian relief to the people of Haiti:

NOTE: We will continue to update this page. The best way for you to help right now is to give through one of the organizations above.